Congratulations to all of the 2004 NLLEA award recipients!

The annual awards for excellence in the enforcement of alcohol laws were presented at the 2004 Annual Conference during the Law Enforcement Awards Luncheon on Friday, August 27, 2004. The keynote speech at the luncheon was given by Dr. David Manning, Regional Administrator for the National Highway Traffic Safety Administration (NHTSA) Western Region, who gave a dynamic presentation linking the importance of enforcement to the devastating effects of impaired driving and traffic fatalities. Following his presentation, Dr. Manning assisted NLLEA President Aidan Moore with the presentation of the following awards.

This award was given to Chief Larry Saunders and the Lakewood, Washington Police Department for their innovative work to reduce violent crime through their “Raising the Bar” program. This program brings together multiple city agencies, such as the fire department, building and safety officials, and community groups to provide seminars to licensed establishments about their responsibilities to the community. Sweeps of these establishments are then conducted by this team to ensure compliance with the laws. In only six months, the number of “serious bar incidents” in these establishments has decreased from 151 to 61 per quarter. Russell Martin of the Lakewood Police Department accepted the award on behalf of the Department and Chief Saunders, who was unable to attend as he was in the middle of a major departmental reorganization.

The California ABC has continued its record of pursuing new strategies to enforce alcohol laws with the development of TRACE – Target Responsibility for Alcohol Connected Emergencies. As investigators at the CA ABC began noticing an increase over the last several years in alcohol-related incidents involving minors, they began working on a policy to actively involve investigators on ground floor investigations of collisions and incidents where underage alcohol use is suspected. The TRACE protocol solidifies the agency’s commitment to partnering with local law enforcement and the California Highway Patrol to target and prevent underage drinking and provides these agencies with ABC officers to help determine where and how the alcohol was obtained with possible criminal procedures for persons who sold or furnished the alcoholic beverages to the minor and administrative sanctions for those liquor establishments involved in the selling/furnishing of the alcohol. Accepting on behalf of the California ABC was Director Jerry Jolly, who invited Lynne Goodwin to the stage to share in the award. Jolly credited Ms. Goodwin with having convinced the ABC and other state agencies to create this protocol following the tragic death of her daughter caused by a teen driving under the influence.

In a year in which many ABC agencies faced cuts in resources and funding, the NLLEA was pleased to present this award to Chief Investigator Frederick Mahony for his leadership and advocacy in ensuring that the Massachusetts ABC investigators were able to continue doing their great work. In 2003, the ABCC Investigative Unit was dismantled and 11 of the agency’s 14 investigators were laid off. After the layoffs, Mr. Mahony worked tirelessly to find ways for the investigators to be rehired. The ABCC ended up being moved to the control of the State Treasurer’s office and the agency was eventually fully refunded to rehire the laid off investigators. Mr. Mahony was instrumental in helping this process along and now Massachusetts again has an effective liquor law enforcement agency in the state.

This agency has a total of 15 officers, including supervisors, yet they have been able to implement a wide array of innovative programs to promote compliance with all provisions of their ABC laws and regulations. As an example, the Liquor Law Enforcement section has implemented a program to identify establishments that have a history of serving obviously intoxicated through undercover operations, and to use both undercover and uniformed officers to prevent these individuals from leaving the establishment and driving under the influence of alcohol. They also have implemented programs to stop illegal importation of alcohol from neighboring states, a problem they have found prevalent in underage drinking situations, where attempts are made to bring in large quantities of alcohol for underage drinkers to sidestep Utah’s prohibition of beer kegs. Accepting on behalf of the agency were Sergeants Greg Willmore and Dale Neal.

Following the NLLEA awards, the first Office of Juvenile Justice and Delinquency Prevention (OJJDP) Underage Drinking Enforcement Training Center’s Law Enforcement Partner of the Year Award was presented. This award is given to a law enforcement officer, agent, or agency whose commitment to reducing underage drinking at the local community or state level has resulted in notable accomplishments in at least three areas: 1) measurable reductions in alcohol availability to youth; 2) innovative implemented programs; 3) training for law enforcement, community or merchants; 4) recognition by peers, local community and or media. OJJDP Administrator J. Robert Flores handed out the awards to this year’s awardees: Sgt. Tony Barone of the Billings Montana Police Department and Alcohol Enforcement Team Five in School District Five of Lexington and Richland Counties in South Carolina. These recipients have worked long and hard to keep their communities safe through enforcement of underage drinking laws. 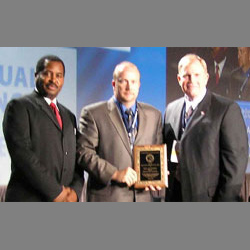 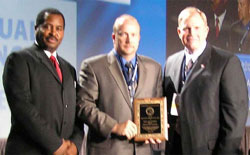 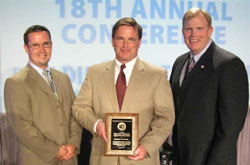