Congratulations to all of the 2005 NLLEA award recipients!

The Arizona Department of Liquor Licenses and Control established its Fraudulent Identification Task Force out of concern for false ids that were being used not only by minors for purchasing alcohol, but also by criminals engaged in human trafficking and possible acts of terrorism. Through its work, three major cases resulted inarrests not only for the manufacture of false ids but also for narcotics sales. In addition, numerous items wereseized, including computer equipment, over 1,000 fraudulent driver’s licenses on computer software, and thousandsof dollars in cash. Arizona Governor Janet Napolitano has now established a statewide Fraudulent Identification Task Force, expanding the Department’s model and influence. Jesus Altamirano accepted the award on behalf of the Department.

The Hot Spot Liquor Task Force of the Phoenix Police Department was formed to respond to high volumes of calls for service and repeated acts of violence at various liquor establishments. It has evolved into a multi-departmental, multi-agency body comprised of various local law enforcement regulatory agencies, including the Arizona Department of Liquor Licenses and Control. While its mission is to reduce calls for service through education, the Task Force utilizes any and all remedial measures necessary to address problems stemming from lack ofcompliance with the law. It monitors calls for service and updates a “top ten” list of problematic liquor establishments monthly, and various measures, such as training, administrative sanctions, and criminal prosecution are applied against locations in the Task Force’s effort to improve compliance. The work of the Hot Spot Liquor Task Force has resulted in better quality of life for numerous neighborhoods in Phoenix. Lieutenant Bill Schemers and Detectives Blake Carlson, Echo Fulton, and Jeff Kornegay accepted the award on behalf of the Task Force.

In the past year, Investigators Armando Gonzalez and Frank Robles conducted a joint undercover operation with the Los Angeles Police Department in the Hollenbeck neighborhood of Los Angeles, an area plagued with a large gang presence and illegal drug activity in several bars. During their undercover operations in three of the worst bars, investigators purchase narcotics from gang members, patrons, and establishment employees. The investigations also revealed that the licensees had abdicated control of their premises to violent gang members who sold narcotics, furnished alcohol to minors, and controlled prostitution activity in these businesses. At great risk to their own safety, Investigators Gonzalez and Robles conducted undercover operations without their duty weapons due to searches that the drug dealers performed on bar patrons before allowing entrance. Because of these investigations, five suspects were arrested for narcotics trafficking, 15 people were arrested for illegal drink solicitation, and the ABC was able to prove that the licensee had direct knowledge of the illegal activity occurring in their establishments. Two of the licenses werer evoked, and a 45 day suspension was imposed on the third premise.

In Fiscal Year 2004-2005, the Louisiana Office of Alcohol and Tobacco Control (ATC) achieved over a 91 percent compliance rate after conducting more than 1,300 compliance checks. In addition, the agency implemented a new program the same year, conducting 460 checks of alcohol beverage outlets to ensure brand integrity and to detect and reduce incidence in which another brand was substituted for the brand ordered. Although three officers were scheduled to receive the award on behalf of the Office, they were unable to attend the Annual Conference due to professional responsibilities in the wake of Hurricane Katrina. Former NLLEA President Dave Reitz accepted the award on behalf of the Louisiana Office of Alcohol and Tobacco Control and later presented the award to ATC Administrator Murphy Painter at the Southern/Northern Meeting of the National Conference of State Liquor Administrators in October. 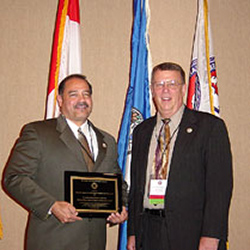 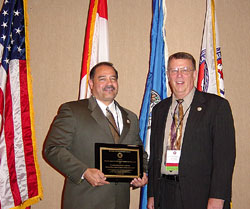 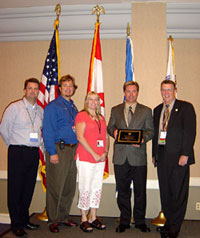