Congratulations to all of the 2006 NLLEA award recipients!

“Operation Save Teens” began in 2001 in response to the rising number of youth apprehended by law enforcement as result of their alcohol and drug use. The educational program targets youth, parents, teachers, school administrators, and law enforcement officials and is based on the premise that the solution to the problem of youth substance use rests with education, enforcement, and rehabilitative services for youth in need.

During the program, audience members are informed about all of the risks and dangers associated with underage drinking and illicit drug use, with presentations featuring laws, statistics, and trends specific to the particular area. Presentations to youth also include heartfelt stories about the losses incurred by victims and their families while presentations for parents feature the various products and paraphernalia typically used by youth who drink or take drugs. Since its inception, the program has reached over 200,000 individuals throughout Alabama and the southeastern United States and received numerous expressions of support and appreciation from past audience members who praise the program’s main speakers, Lt. Mike Reese and Mrs. Carol Hudson.

The Foxfield Races Coalition was formed in 2005 by the Albemarle County Police Department and the Virginia Department of Alcoholic Beverage Control after spectators at an annual steeplechase became violent, confrontational with police, and one 19 year-old woman registered a BAC in excess of .30. It began as a law enforcement response, but within weeks of its formation, the coalition quickly grew to include emergency medical personnel, community advocacy groups (MADD and Virginia College Parents), The Foxfield Races Association (the event sponsor) and the Virginia Motor Coach Association.

The steeplechase takes place just outside of Charlottesville, home to the University of Virginia, and attracts an estimated 22,000 spectators each year, a large portion of which are college students from other institutions who arrive via motor coach. The coalition instituted several new policies, including a “zero tolerance” approach to underage drinking and possession, public intoxication, and disorderly conduct. The coalition is also responsible for arranging for on-site medical assistance for anyone in need as well as convincing motor coach companies to prohibit passenger drinking and transport of large quantities of alcohol. As a result of the changes pushed by the coalition, the numbers of arrests were higher than in previous years – an expected consequence of the zero tolerance approach. The event also experienced nearly a 66 percent reduction in the number of people treated for medical issues related to alcohol, and the average BAC level for those that were treated was much lower.

While at an international Emergency Medical Services conference in New Orleans, Agent Howard A. Tyler and his family were thrust into the chaos and destruction of Hurricane Katrina, one of the most devastating storms in our nation’s history. Conference attendees were ordered to leave the hotel, yet airports were closed and roads impassable. No alternative refuge was provided, and they were left to fend for themselves in the ensuing commotion.

Displaying both professionalism and compassion, Agent Tyler immediately organized and instructed conference attendees and their families to take shelter in the safest available location. He then established collaboration with the New Orleans Port Authority SWAT Team and obtained an on-going supply of food and water for his group.

With his wife, Becky, Agent Tyler rendered first aid and emergency services at first to law enforcement personnel and later to other hurricane victims with chronic and severe medical problems. He also maintained contact with staff at his department headquarters, relying information essential to the group’s rescue.

After six grueling days, Agent Tyler, his family, other members of their group, and the patients for whom they cared were rescued and evacuated. His judgment and courage in restoring order and providing assistance to those around him exemplify outstanding leadership, ensuring the safety and rescue of numerous people trapped by the storm and subsequent flooding.

In a year in which the United States was battered by a number of devastating hurricanes, Mississippi Alcoholic Beverage Control (MS ABC), an agency with a total of 25 agents, dispatched 17 of those agents to the Gulf Coast within hours of Hurricane Katrina’s landfall. Agents worked non-stop supporting local law enforcement, conducting search and rescue missions under extremely dangerous conditions and apprehending numerous looters during their patrols. In the weeks and months following the hurricane, MS ABC agents continued to support local law enforcement and the Mississippi Bureau of Investigation (MBI).

MBI Director Lt. Colonel Mike Berthay recognized MS ABC agents as the most efficient and hardworking officers assigned to the Missing Persons Task Force. Agents were directly responsible for finding hundreds of missing persons and re-connecting many families separated during the storm. MS ABC agents also participated in locating and apprehending displaced sex offenders that failed to register after fleeing the Gulf Coast. 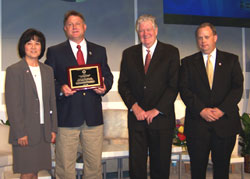 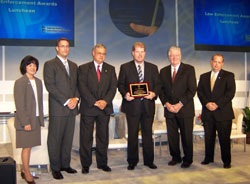 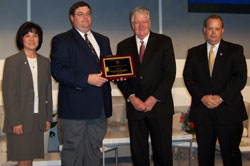 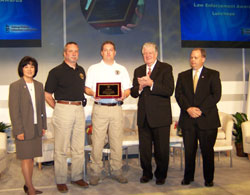