Congratulations to all of the 2010 NLLEA award recipients!

At this year’s 24th Annual Conference in Anaheim, CA, the NLLEA had the opportunity to recognize the following members and agencies for their outstanding work in the field of liquor law enforcement.

The NLLEA’s Award for Most Innovative Liquor Law Enforcement Program is given in recognition of effective programs, programs that have produced positive changes in community alcohol-related problems, or programs that have resulted in new efficiencies or fiscal saving for liquor law enforcement. The Virginia Department of Alcoholic Beverage Control’s Military Outreach on Alcohol Incident Prevention, began in 2008 when the Virginia ABC joined forces with the U.S. Army and Navy to communicate an important message to the more than 120,000 service members in and around Norfolk’s Naval Base and the Army bases at Fort Eustis and Fort Story: “Don’t let alcohol stand in the way of your future.” Starting in July 2008, the VA ABC delivered drinking and driving prevention materials and customized fact sheet outlining Virginia’s alcohol laws and penalties to the Norfolk Naval Base, Fort Story, and Fort Eustis for distribution. At the end of 2008, public service announcements starring ABC Commission Esther Vassar and General Andrew Bowes, Garrison Commander for Fort Eustis and Fort Story, were released. At this time, the base Public Affairs Unit was created. This as well as future PSA’s urging soldiers who choose to drink to do so responsibly, was seen by the entire military communities of Fort Story and Fort Eustis. Similar PSA’s were developed in 2009 for the Norfolk Naval Base.

By August 2009, the Navy-ABC public service announcements had been viewed more than 4,800 times ; Public service announcements starring 2009 Miss Virginia Caressa Cameron were viewed online more than 28,000 times and were shown on four major network television channels during peak times such as NHL and NFL games. The VA ABC also partnered with the Virginia Department of Veterans Affairs and the Virginia Department of Motor Vehicles as well as local retail establishments to kick off the Safe-Ride Home program, which among other things encourages soldiers who have had too much to drink toask a manager on duty for a free taxicab certificate to cover their fare home. For all of these excellent initiatives, the VABC, in partnership with the US Naval Safety Center were awarded the NLLEA’s 2010 Most Innovative Liquor Law Enforcement Program of the Year.

Investigator Steven Newell of the Kentucky Alcoholic Beverage Control is, in the words of his nominator, “the epitome of … public service and dedication.” In 2009, Investigator Newell entered a burning building and helped evacuate its elderly residents. For this, he has been recognized by the Lexington Division of Police with their Meritorious Service Award for 2009, and by his peers as ABC Investigator of the Year.

In addition to his life saving actions, he is involved in numerous aspects of alcoholic beverage control and law enforcement throughout the state. He currently sits as a Board Member on the Kentucky Peace Officers Association. He is responsible for ensuring that each ABC investigator who loses their life is remembered, and the ceremonies that he organizes “rival any in the state.” He is active in research and development of new equipment and acts as a liaison throughout this process. For his outstanding acts of public service, Steven Newell was selected to be the 2010 Liquor Law Enforcement Agent of the Year Award.

This year the NLLEA’s Liquor Enforcement Agency of the Year goes to an agency that has much to be proud of. The California Alcoholic Beverage Control has been effective in working with local law enforcement to emphasize law enforcement partnerships during the economic downturn and reaching out to associations and community organizations in an effort to increase compliance through stronger enforcement and educating businesses on alcohol laws. Their innovative programs include the TRACE program, wherein the CA ABC is notified when an ABC listed outlet may be responsible for furnishing alcohol to minors that result in serious incidents such as car crashes or overdoses. This program resulted in 134 arrests of individuals and more than 80 accusations filed against businesses that sold alcohol to minors.

Another program, the Grant Assistance Program, continues to push its innovative approach to broaden and increase the level of alcoholic beverage enforcement by working in partnership with cities and counties to develop an effective, comprehensive, and strategic approach to eliminating the crime and public nuisance problems associated with problem alcoholic beverage outlets. This program currently funds 37 local law enforcement agencies.

The Agency was named “Law Enforcement Agency of the Year” by the Neighborhood Market Association, and their programs have garnered National attention with segments on ABC’s Good Morning America and other local news outlets. For these and many, many more reasons, the NLLEA was very pleased to present the 2010 Award for Liquor Enforcement Agency of the Year to the CA ABC.

The John W. Britt Community Service Award is named for a former Deputy Director for Operations for the North Carolina Alcohol Law Enforcement Division who died unexpectedly in 1995. John Britt was also a charter member and past president of our Association.

This year the John W. Britt Community Service Award went to the Montgomery County Keeping it Safe (KIS) Coalition on Under 21 Alcohol Prevention, a volunteer-run community group that seeks to reduce alcohol abuse for youths less than 21 years old. Based on the Communities Mobilizing for Change of Alcohol model, the KIS Coalition works closely with the Montgomery County Department of Liquor Control and local police to run alcohol-related educational programs.

Annual programs consist of a limousine training around prom time to educate drivers on state alcohol laws pertaining to vehicles for hire and best practices and contracts for escorting teens; a teen alcohol poisoning poster contest, addressing what alcohol poisoning is and what teens should do if they identify someone who has it; and a student video contest where middle- and high-school students create a 30-second public service announcement, which is then promoted throughout the county for the rest of the year. Along with its popular youth programs, the KIS Coalition also serves to bring together local non-profits, government agencies, and volunteers for the purpose of under-21 alcohol access prevention and public awareness. While representatives from the KIS Coalition were not able to receive the award while at the conference, the NLLEA congratulates them on their success in mobilizing an outstanding coalition. 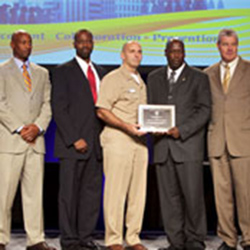 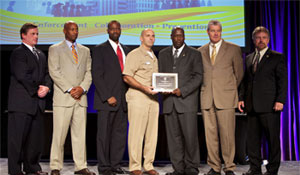 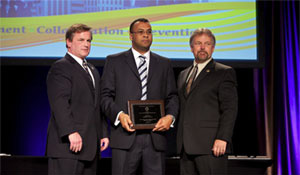