Congratulations to all of the 2013 NLLEA award recipients!

Each year the National Liquor Law Enforcement Association presents awards to outstanding leaders in the field of alcohol law enforcement. This year’s award winners were presented with plaques at the 27th Annual Conference “Advancing Liquor Law Enforcement to Meet the Challenges of Today’s Society” in Phoenix, Arizona. The following awards were given:

The NLLEA’s Award for Most Innovative Liquor Law Enforcement Program is given in recognition of effective programs, programs that have produced positive changes in community alcohol-related problems, or programs that have resulted in new efficiencies or fiscal saving for liquor law enforcement. The 2013 NLLEA Liquor Law Enforcement Program was awarded to the Pennsylvania State Police Bureau of Liquor Control Enforcement System for establishing the Automated Incident Memo System (AIMS) and Statistical Tracking Database Standardization (STDS) in order to receive, document, assign, and classify liquor license and associated complaints. This system also collects statistical information on individual officer’s citation and warning history. Essential personnel, including supervisors and command personnel, were trained in the implementation, accessing, and utilization of the information, which allowed supervisors to review the statistical reports on their subordinate’s enforcement statistics, discuss performance, and include relevant information in the annual performance review. An Investigative Procedures Manual was also created in order to attempt to standardize investigative procedures across the state and establish quality investigations. This manual helps train all new staff and is a mechanism to communicate with field officers regarding any legislative or other changes in case law regarding investigative procedures. The award was accepted by Major Thomas Butler of the Pennsylvania State Bureau of Liquor Control Enforcement.

The 2013 recipient, Special Agent Mark Scott from the Virginia Department of Alcoholic Beverage Control, is very deserving of this award. Special Agent Scott served as the primary undercover agent in four separate investigations this year and was involved in infiltrating groups involved in the illegal manufacture, transport, and sale of moonshine as well as illegal gambling, animal cruelty, illegal sale of animal organs, and narcotics distribution. He has been integral in the collaboration of multiple organizations, including local, state and federal partners. In one case, Special Agent Scott made more than 20 felony controlled purchases of untaxed liquor from an armed offender while undercover, leading to jail time for the person of interest. Special Agent Scott can also be credited for saving more than 100 animals involved in an animal cruelty case, including 50 hounds that were starving and in need of veterinary attention. Special Agent Scott spear-headed an initiative that is likely to become a yearly scheduled operation for the Virginia agency, which includes aerial reconnaissance to monitor areas that correspond to ongoing investigations of suspected liquor still sites. The first year this reconnaissance was implemented, more than thirty operational stills were located and destroyed.

For his outstanding investigative skills, dedication to preventing alcohol-related harm and improving public safety and the quality of life for Virginia residents, the 2013 Liquor Law Enforcement Agent of the Year Award was awarded to Special Agent Mark Scott of the Virginia Department of Alcoholic Beverage Control Bureau of Law Enforcement.

The NLLEA Liquor Enforcement Agency of the Year is awarded to an agency that consistently works to proactively enforce alcohol laws to make their communities safer. The 2013 Liquor Law Enforcement Agency of the Year award goes to The Arizona Department of Liquor Licenses and Control. They operate on the “education, prevention, and enforcement” model of regulation, which has led to the establishment of free liquor law and fake ID courses for licensees in order to reduce liquor violations and related fines. When fines were necessary, payment plans were instituted to keep licensees from having to close their doors. Additional education was provided through a crash course on alcohol industry trade practice for wholesale licensees and their legal counsel. This led to licensees voluntarily exposing violations and assisting the Department in their investigations. The Department and alcohol industry also collaborated on completely rewriting Arizona state’s liquor regulations, which had not been updated in three decades. These regulations establish the “prevention” component of their education, prevention, and enforcement model. For the impressive accomplishments undertaken by the agency, NLLEA presented the 2013 Award for Liquor Enforcement Agency of the Year to the Arizona Department of Liquor Licenses and Control. 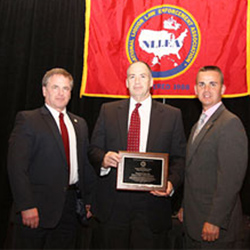 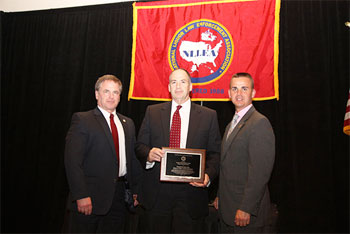 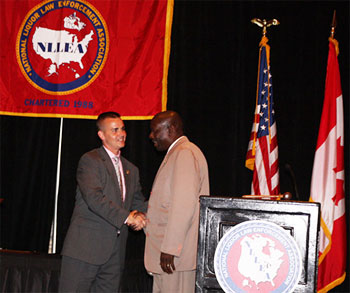