Congratulations to all of the 2014 NLLEA award recipients!

Each year the National Liquor Law Enforcement Association presents awards to outstanding leaders in the field of alcohol law enforcement. This year’s award winners were presented with plaques at the 28th Annual Conference “Providing Tools and Training for Alcohol Law Enforcement” in Louisville, Kentucky. The following awards were given:

The NLLEA’s Award for Innovative Liquor Law Enforcement Program is given in recognition of effective programs, programs that have produced positive changes in community alcohol-related problems, or programs that have resulted in new efficiencies or fiscal saving for liquor law enforcement.

The 2014 NLLEA Innovative Liquor Law Enforcement Program Award was given to the Boise Police Department for their “10-10” zone initiative, which has decreased underage drinking citations, over-service in bars, and open container violations during football game days. The program was developed with community stakeholders, including the Idaho State ABC, a local community coalition, and the Idaho Board of Education. These groups supported the proposal and it was made permanent city code in 2014. This zone reduces the area where tailgating is permitted, which allows officers to monitor a smaller geographical area for better containment. Tailgating hours were also reduced to 10am-10pm in order to reduce rates of impaired driving after games. As a result of this program, officers are now able to expand enforcement efforts to local bars and restaurants on game days, and there has been an increased focus on underage drinking and bar violations. Overall, this program has led to a 31% decrease in open container violations and a 64% decrease in underage drinking violations. For the innovation and creativity shown in addressing these issues, the award for Innovative Liquor Law Enforcement Program of the Year was presented to the Boise Police Department and accepted on behalf of the Boise Police Department by Corporal Jermaine Galloway.

INFOPublic Safety Agency of the Year

The NLLEA Public Safety Agency of the Year Awardis given to an alcohol law enforcement agency that shows dedication to ensuring the safety of its community and citizens through programs and practices that directly impact the public safety of the region, with measurable positive results.

In January of 2013, the Ohio Investigative Unit (OIU) developed a Trace Back program for troopers and agents statewide. This program included a mandatory reporting system on all alcohol-related fatal crashes. Since the creation of the program there has been a significant increase in local law enforcement agencies contacting OIU for trace back investigations. Additionally, Ohio has seen a decline in the number of alcohol-related fatalities in the past two years as liquor permit holders and citizens are held responsible for their alcohol-related behavior. As a result of the Trace Back program’s impact on public safety, the 2014 award for Public Safety Liquor Law Enforcement Agency of the Year was presented to the Ohio Investigative Unit. Deputy Director and NLLEA Past President Rich Cologie accepted the award on behalf of the Ohio Investigative Unit.

The Liquor Law Enforcement Agent of the Year Award is given for acts of heroism or bravery, creativity resulting in innovative programs, recognition by peers and/or the local community, or other actions that enhance the image of an agency or law enforcement in general. The NLLEA gave two Agent of the Year awards in 2014, to best recognize the exemplary commitment both agents have made to the field.

Officer Scott Berdine from the Pennsylvania State Police Bureau of Liquor Control Enforcement recognized a need for a reporting system to track and manage investigations, so he wrote computer code for a software program that streamlined the fieldwork and reporting process for all liquor enforcement officers in the Bureau of Liquor Control Enforcement. His system coordinates information from the PA Liquor Control Board, the PA Department of Health, additional state police systems, and a GPS mapping system to create a fully integrated records management system that officers can use to enter data. Officer Berdine also wrote a supervisory module for the initial program, which allows supervisors to assign investigations and review and approve reports created by the reporting system. Officer Berdine built this system mostly on his own time, and created a program that would have cost over $500,000. He was also heavily involved in the training of all of Pennsylvania’s law enforcement officers on how to use the new system. Through his work, Officer Berdine has enhanced the effectiveness and efficiency of bureau operations, and has become an integral part of daily operations for the bureau.

Assistant Agent-in-Charge Robert Boldin from the Ohio Investigative Unit has led a team of Federal, state, county and local law enforcement officers in a gambling investigation that impacted the entire state of Ohio. AAIC Boldin led his team in the investigation of over 50 separate internet cafes throughout 2013, and worked with over 100 law enforcement officers and prosecutors to spearhead the prosecution of internet café operators and software providers. Throughout 2013, 24 search warrants were executed on local permit premises, cafes, businesses, and banks. Over 30 seizure orders were executed at a number of financial institutions throughout the nation, and AAIC Boldin and his team attained 30 criminal convictions for gambling, operating a gambling house, possession of criminal tools, and money laundering. Over $2 million dollars have been yielded in forfeitures related to this investigation, in addition to over 1,000 gambling devices, controlling computers, servers and televisions. The work done by AAIC Boldin and his team led Ohio lawmakers to pass legislation essentially shutting down internet cafes in Ohio who engage in a gambling enterprise. AAIC Boldin’s testimony was instrumental in the passing of this legislation.

The NLLEA Liquor Enforcement Agency of the Year award is given in recognition of demonstrated agency effectiveness, implementation of innovative programs, community or media recognition or model training programs or practices.

In 2014, the Washington State Liquor Control Board has accomplished each of the criteria for the agency of the year award. The Washington State Liquor Control Board has experienced two major public policy changes in the past 3 years.  The first change, the privatization of the sale of spirits, led to an increase in spirit retailers from 328 to 1400, without a coinciding increase in enforcement staff.  The second major change was the passage of the legalization of recreational marijuana.  Each policy change required the Washington State Liquor Control Board to create new rules, policies, and procedures to regulate the new market place. Despite these challenges, the Washington Liquor Control Board has continued to actively enforce both alcohol and marijuana laws. Compliance checks were conducted at 100% of licensed spirit retailers, 25,000 alcohol licensees have received educational visits and premise checks in the past year, and the enforcement division has conducted over 250 inspections of licensed marijuana retailers in the first four months of the licensing process. A Responsible Vendors Program was created to train employees who work at off-premise retail establishments and increases the penalties for violations involving the sales of spirits for those who opted out of training. There was a 10% increase in compliance among licensees who were part of the RVP program. Additionally, the Washington Liquor Control Board has continued collecting place of last drink data with local law enforcement, and has seen a 28% decrease in the number of DUIs attributed to the top 20 locations that were indicated in the service of alcohol to the driver, as well as an overall reduction in the number of fatal DUI crashes since 2008.

Due to the dedication, professionalism, and innovativeness of this agency in continuing to enforce liquor laws while confronting new challenges, the NLLEA presented the 2014 award for the Liquor Law Enforcement Agency of the Year to the Washington State Liquor Control Board and Chief Justin Nordhorn accept the award on behalf of the Washington State Liquor Control Board. 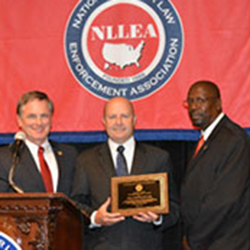 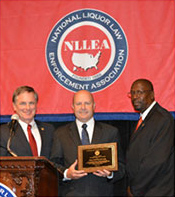 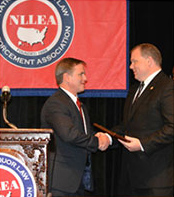 Washington State Liquor Control Board Chief Justin Nordhorn accepts the Agency of the Year award on behalf of their agency. 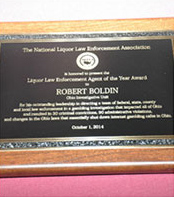 The Agent of the Year Award plaque presented to Assistant Agent-in-Charge Robert Boldin of the Ohio Investigative Unit. 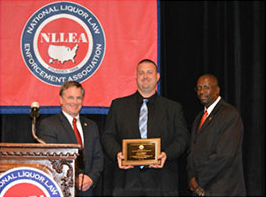