The NLLEA, in partnership with the Indiana State Excise Police, hosted the 2016 conference, NLLEA: Celebrating 30 years of providing leadership and training for the field of alcohol law enforcement, in Indianapolis, Indiana from Wednesday, September 7 – Friday, September 9, 2016. There were over 100 alcohol law enforcement professionals in attendance, traveling from across the United States, Sweden and Canada.

The opening remarks were followed by the opening session with keynote speaker Dr. Traci Toomey, a professor with the Division of Epidemiology and Community Health and director of the Alcohol Epidemiology Program at the University of Minnesota. Dr. Toomey shared her research findings on the effectiveness of enforcement and training efforts, such as compliance checks and server training, to reduce sales to intoxicated persons and youth access to alcohol. Dr. Toomey discussed what her research findings indicate for the future direction of alcohol law enforcement and questions that still need to be evaluated to determine the best use of alcohol law enforcement efforts and resources.

NLLEA members then attended the President’s Reception, giving professionals in the field an opportunity to share best practices with one another in an informal setting.

After the general session, participants were able to choose between two workshops, Place of Last Drink: Identifying and Addressing Over-Service of Alcohol and Large Event Planning: The Indianapolis Model. In the first workshop, Osseo Police Department Chief Shane Mikkelson and Brooklyn Center Police Department Sergeant Patrick Toohey outlined the Place of Last Drink (POLD) online data collection system created by the Minnesota POLD Task Force. The workshop discussed how to get support from local departments and how best to collect and share POLD data to maximize resources by identifying establishments with recurring reports as the place where alcohol was last consumed by persons involved in alcohol-related incidences. In the second workshop, Indiana Excise Police Captain Monty McMahan, Speedway Police Department Chief Jim Campbell, and Hulman Motorsports Senior Director Michael Bates shared the approaches they take when planning for large scale events in Indianapolis. Collaborative efforts between enforcement agencies and best practices for controlling and regulating alcohol at large functions were discussed.

Lunch was followed by a general session, Alcohol Law Enforcement and Local Law Enforcement: Outreach, Partnerships and Lessons Learned, which presented the most recent NLLEA project which utilized funds from the National Highway Traffic Safety Administration to build a better understanding of the role and authority of alcohol law enforcement among other enforcement entities.  Director John Yeomans of the Delaware Division of Alcohol and Tobacco Enforcement, Lieutenant Tim Kincaid of the Utah Department of Public Safety Alcohol Enforcement Team, and Senior Special Agent David Huff of the Virginia Department of Alcoholic Beverage Control, representing three of the eight funded states, presented on their outreach approaches, successes that have come out of training local law enforcement, and challenges they have faced.

Friday morning started off with a general session, Regulating and Enforcing New and Diverse Products, that highlighted the newest alcohol-related productsbeing produced and/or sold in the United States and the best approaches to regulating the products that are non-traditional, such as confectionary and food products. Nicholas Capezza, a policy and research analyst with the National Alcohol Beverage Control Association, shared his extensive knowledge of new products and the many forms they take and Chief Counsel Renee Metz of the North Carolina Alcoholic Beverage Control Commission discussed regulation approaches for the most recent products seen in North Carolina. Chief Justin Nordhorn of Washington State Liquor and Cannabis Board rounded out the discussion by sharing his state’s approach to enforcement of new products.

The final session on Friday, The Next 30 Years: Identifying Challenges and Solutions for the Future of Alcohol Regulation was presented by attorney Richard Blau, whose professional focus is on the rules and regulations that govern the marketing, sale and consumption of alcoholic beverages. Mr. Blau shared the most recent changes in judicial and legislative actions related to alcohol enforcement and what these changes mean for alcohol law enforcement professionals. Specific examples, including published court decisions and recently-enacted statues, were included in the workshop.

The Annual Business Meeting was held on Thursday afternoon, with the membership voting to approve all business conducted by the NLLEA Executive Board during the past year.  The members were updated on the cooperative agreement with NHTSA; future association initiatives, including the formation of a POLD data collection tool; the fiscal standing of the association; and the training symposium held in Dover, Delaware in April 2016.

Jermaine Galloway updated the members on his most recent professional endeavor, starting his own training business fulltime, which has changed his eligibility to serve on the NLLEA board. In lieu of serving on the board, Jermaine graciously agreed to work with the NLLEA on future training initiatives. With this change in leadership, Justin Nordhorn moved into the Vice President position and there were openings for the Sergeant-at-Arms and Secretary/Treasurer positions for the 2016-17 board. The membership elected the Ohio Department of Public Safety Investigative Unit’s Agent in Charge Greg Croft to the position of NLLEA Sergeant-at-Arms and the Delaware Division of Alcohol and Tobacco Enforcement’s Deputy Director Robert Kracyla to the position of NLLEA Secretary/Treasurer.

The conference ended Friday with the NLLEA Awards Luncheon. The luncheon began with a tribute to fallen officers and was followed by a luncheon and presentation of the annual NLLEA awards. Award recipients included: Keeping It Safe Under 21 Alcohol Use Prevention Coalition from Montgomery County, Maryland receiving the John W. Britt Community Service Award; Hillsborough County Sheriff’s Office receiving the Innovative Alcohol Law Enforcement Program of the Year; Agent Daniel Mone of the Ohio Investigative Unit and Agent Casey Tinloy of the California ABC each receiving the Alcohol Law Enforcement Agent of the Year Award; and the Delaware Division of Alcohol and Tobacco Enforcement receiving the Alcohol Law Enforcement Agency of the Year Award. The NLLEA also presented a Service Award to the Indiana State Excise Police for co-hosting the conference and a Meritorious Service Award to Wesley Kuhl for serving as the NLLEA Board President for 2015-2016. (Visit the NLLEA Awards page for more details.) Past President Joseph Cannon swore in the 2016-2017 NLLEA Board of Directors:  President James Jones, Vice President Justin Nordhorn, Secretary/Treasurer Robert Kracyla, Sergeant-At-Arms Greg Croft, and Immediate Past President Wesley Kuhl.  The luncheon concluded with 2016-2017 President James Jones sharing his vision for the NLLEA for the upcoming year, emphasizing the vital role alcohol law enforcement plays in protecting public safety and the need for NLLEA members to continue to educate the general public, other law enforcement agencies and decision makers about important alcohol law enforcement work.

Stay tuned for information about the 31st Annual Conference to be held in August 2017 in Oklahoma City, Oklahoma. 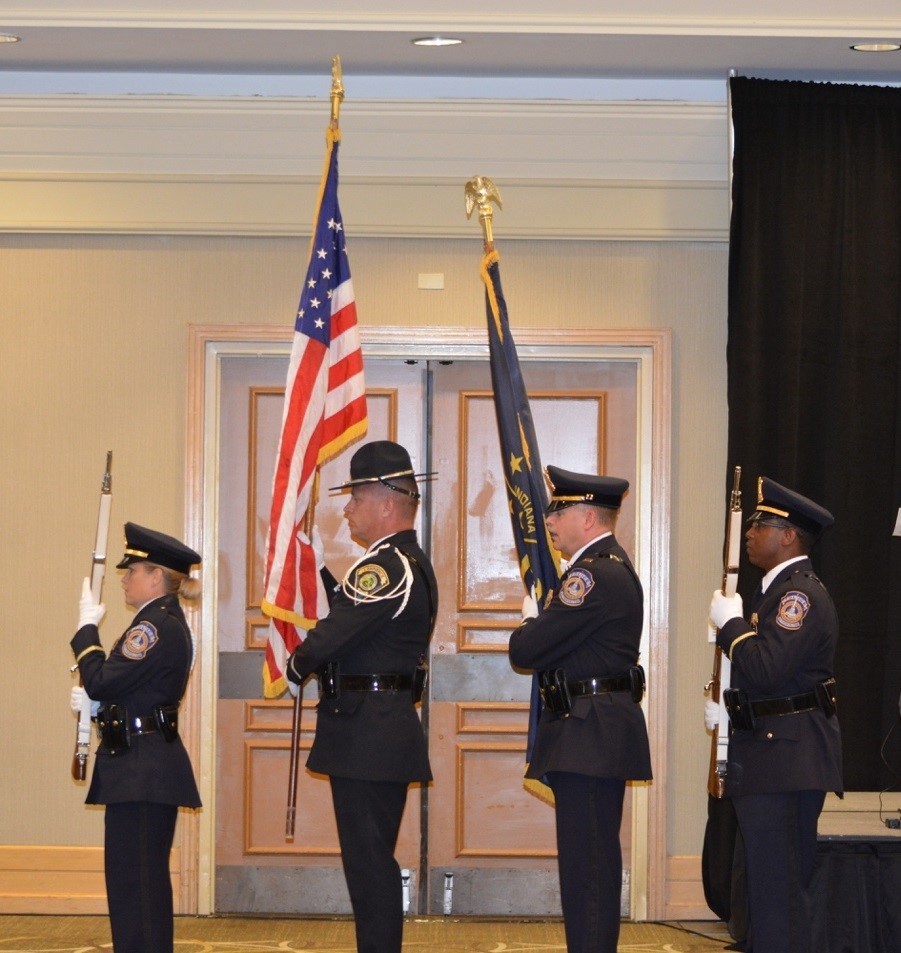 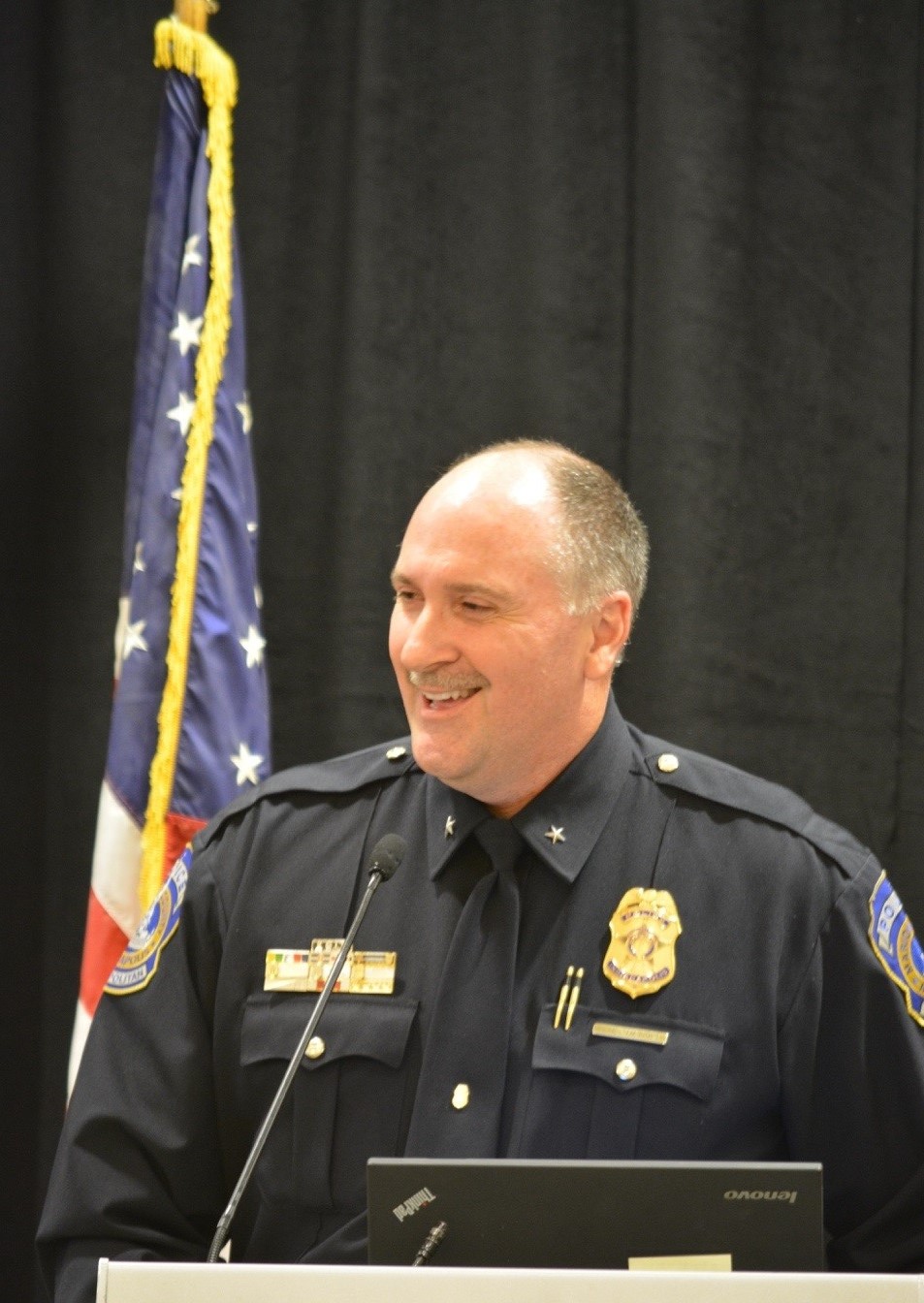 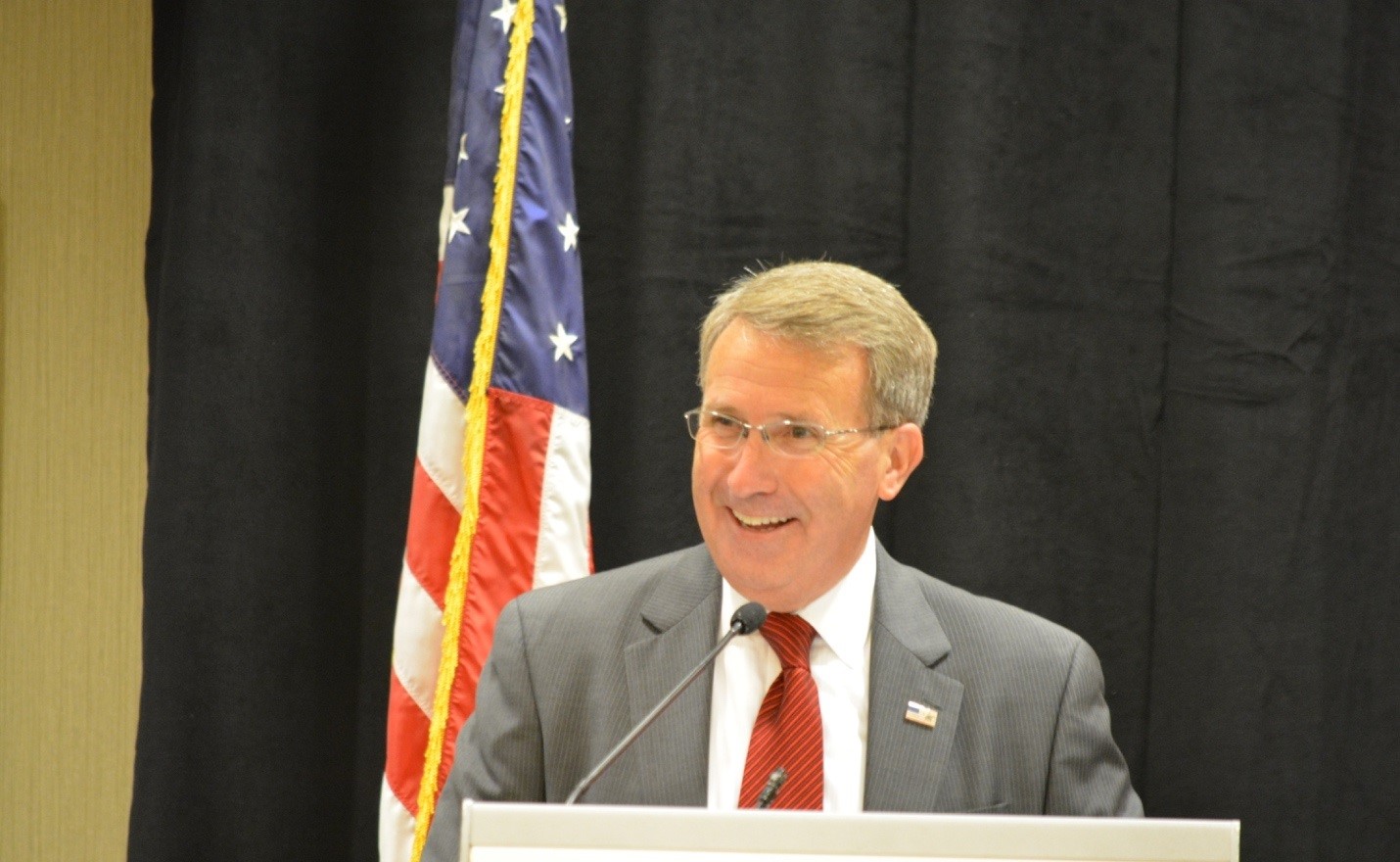 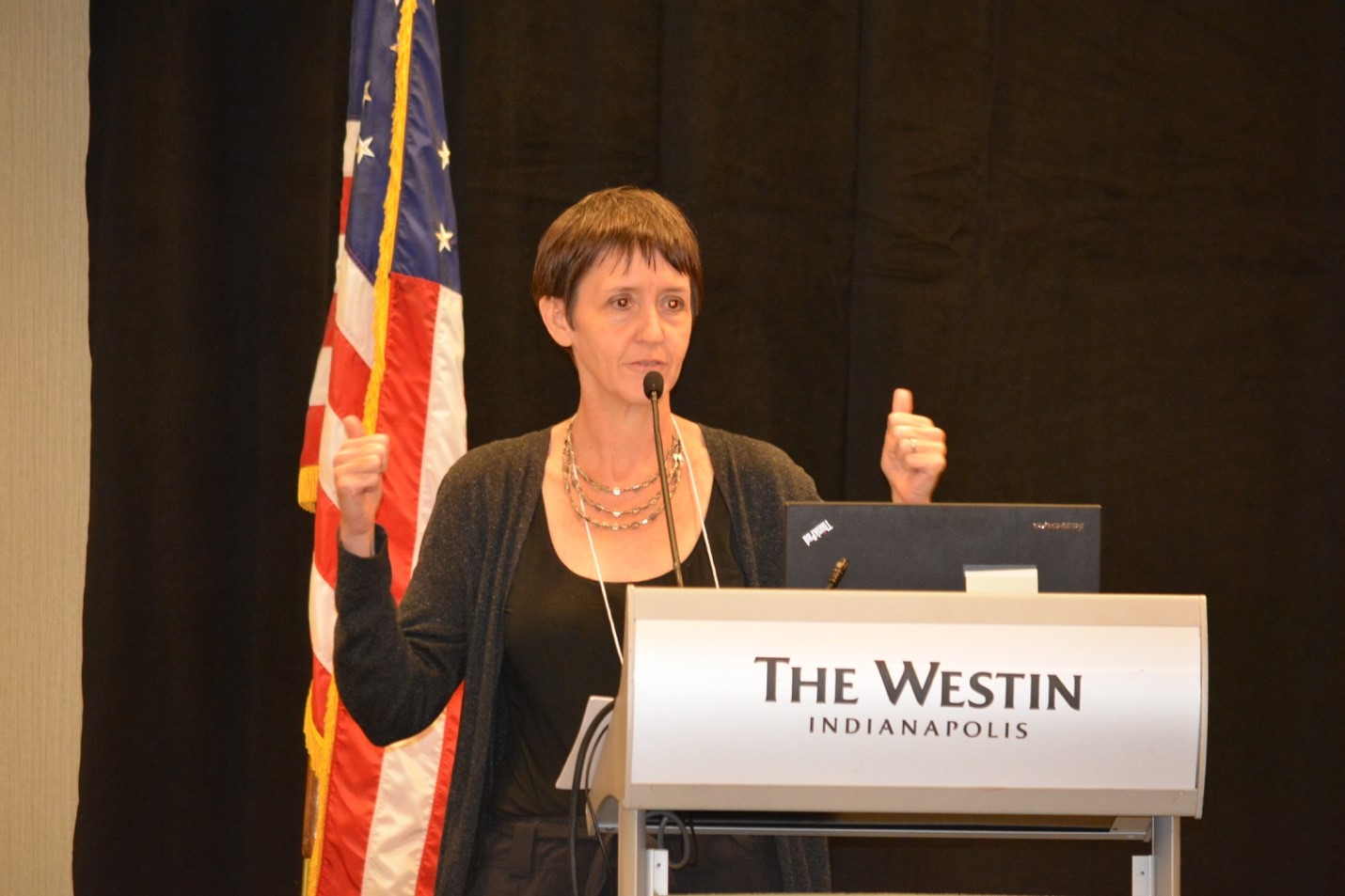 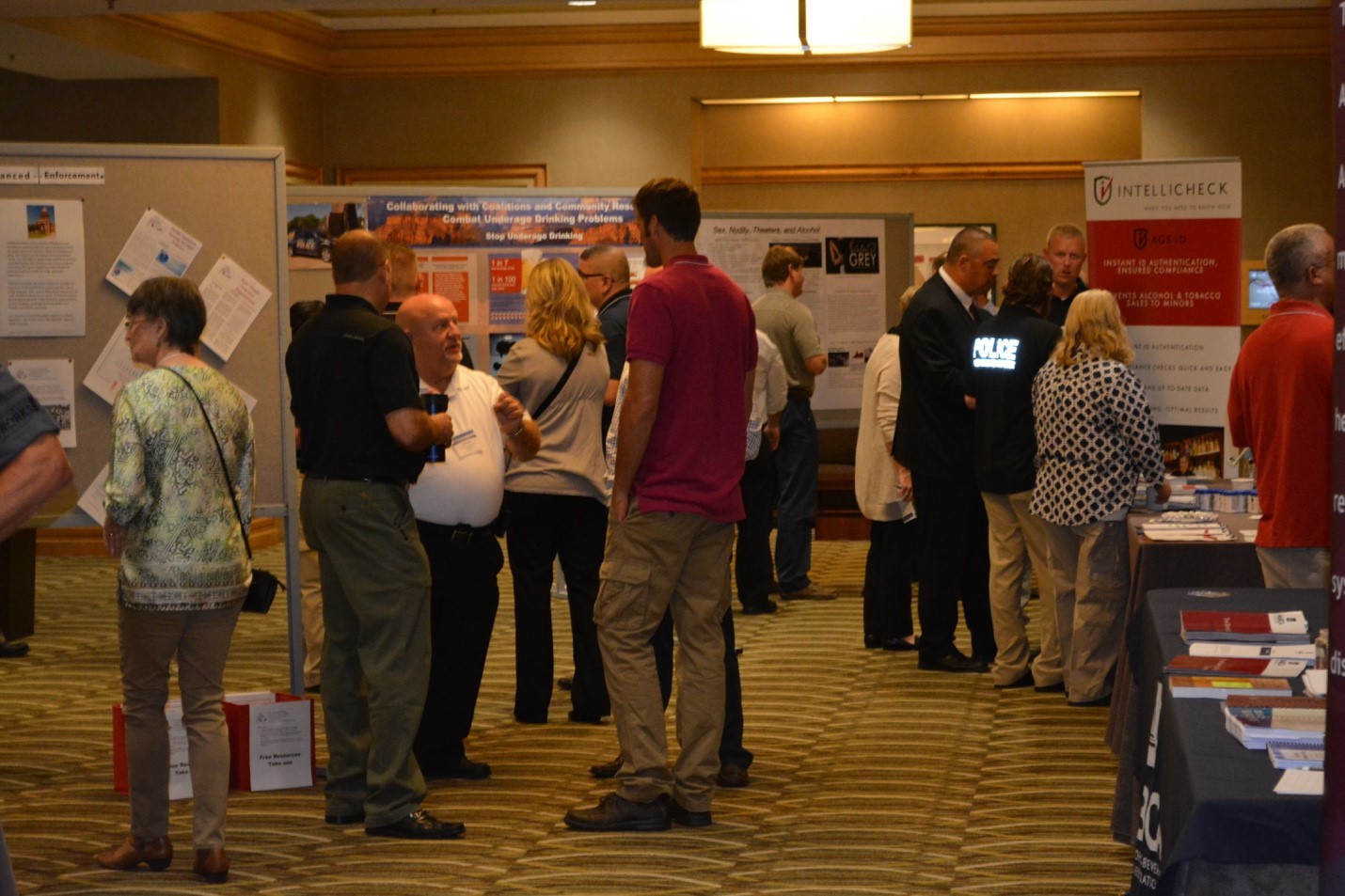 Conference attendees ask poster presenters questions about their work and visit with vendors at the 2016 annual conference, NLLEA: Celebrating 30 years of providing leadership and training for the field of alcohol law enforcement. 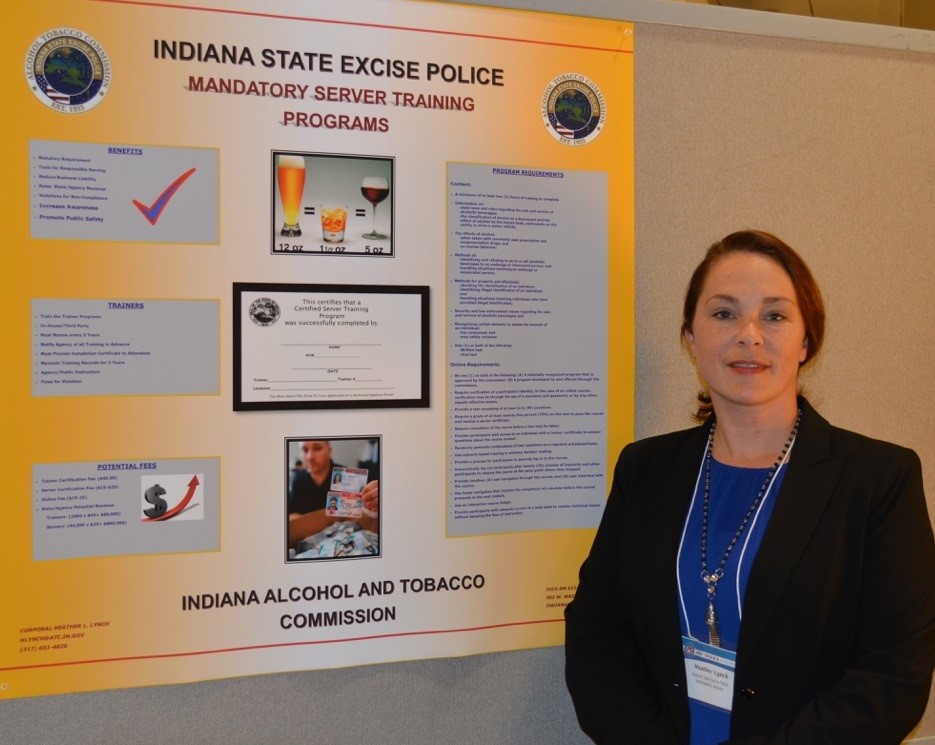 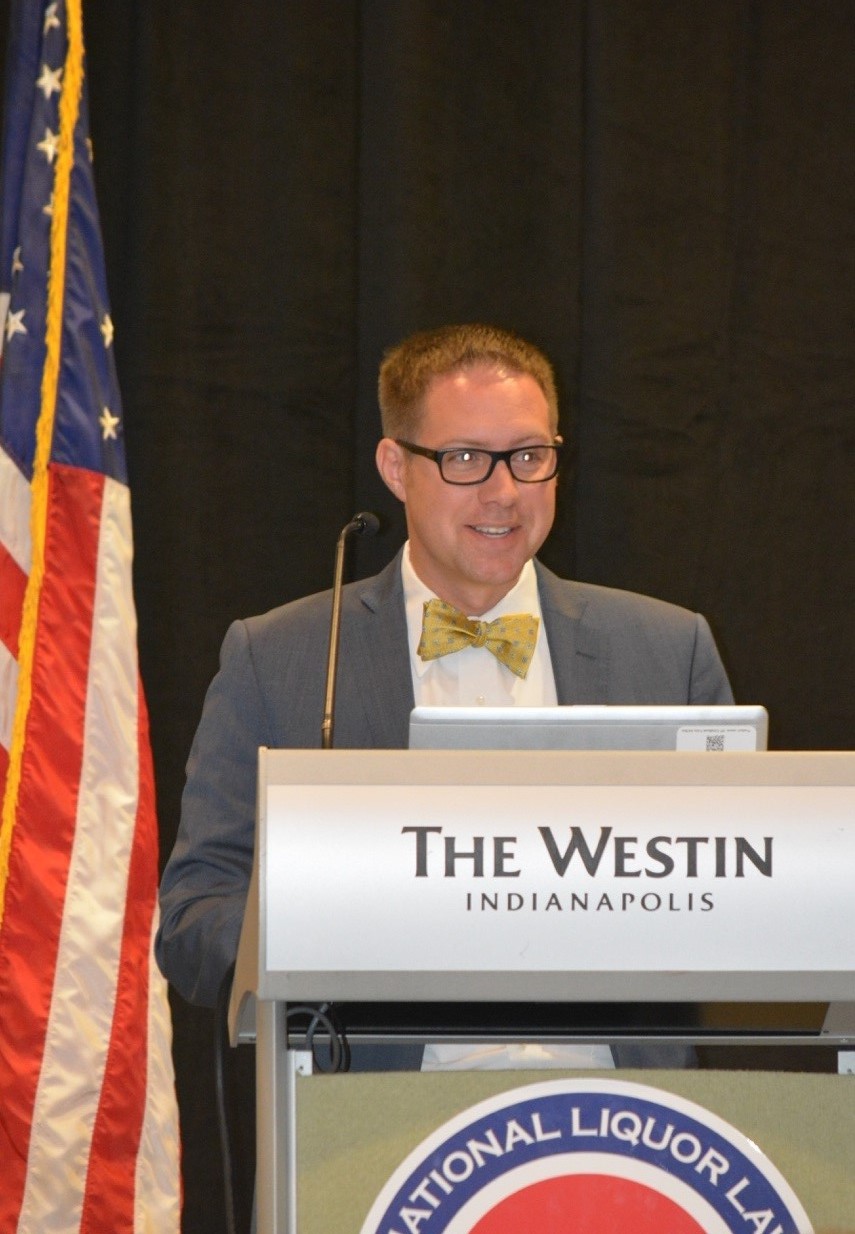 Indiana State Excise Police Lieutenant Travis Thickstun shares about the successes and challenges the Intensified College Enforcement program has experienced since its inception. 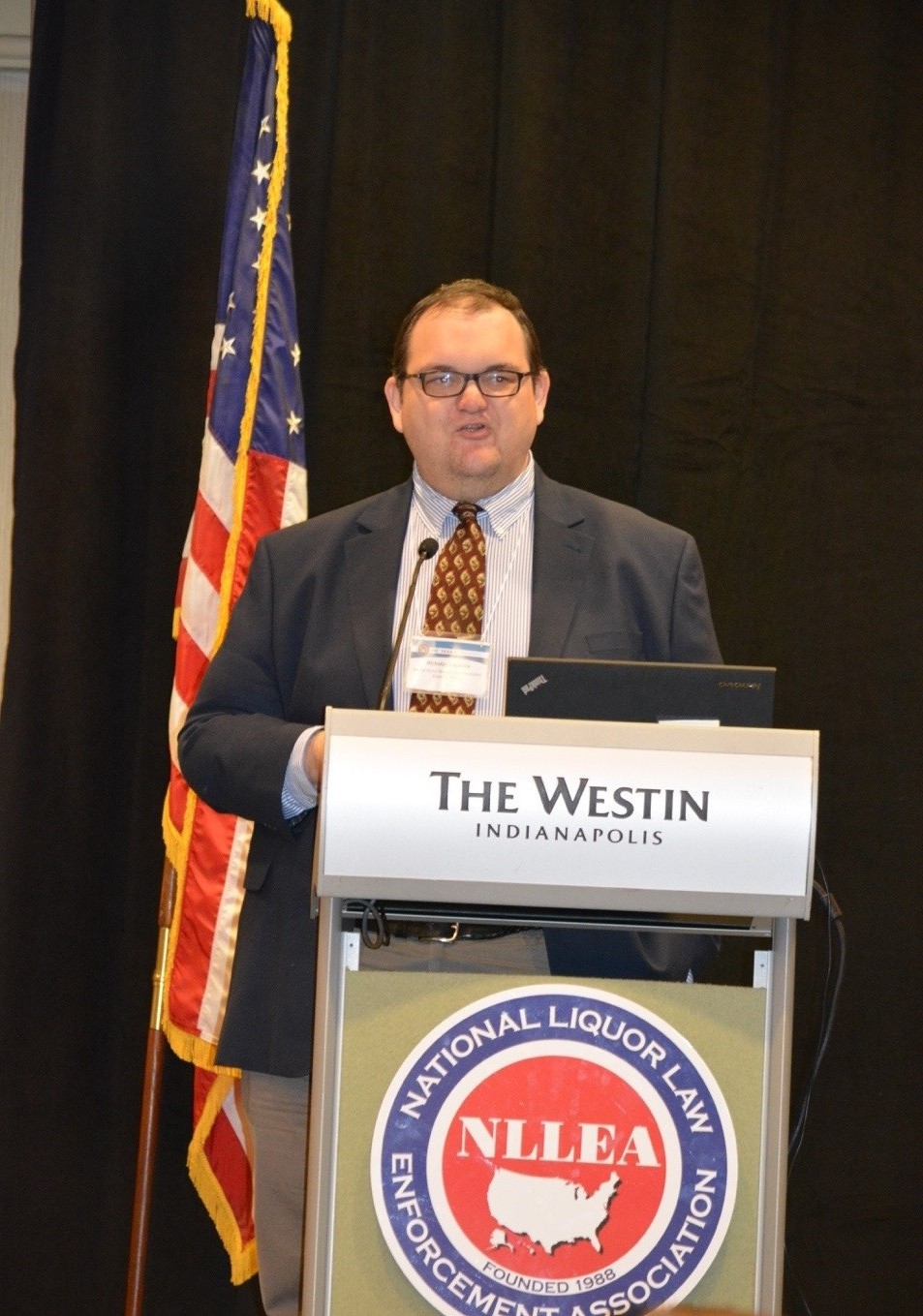 During the annual business meeting, the Ohio Department of Public Safety Investigative Unit’s Agent in Charge Greg Croft was elected as Sergeant at Arms for the 2016-17 NLLEA board. 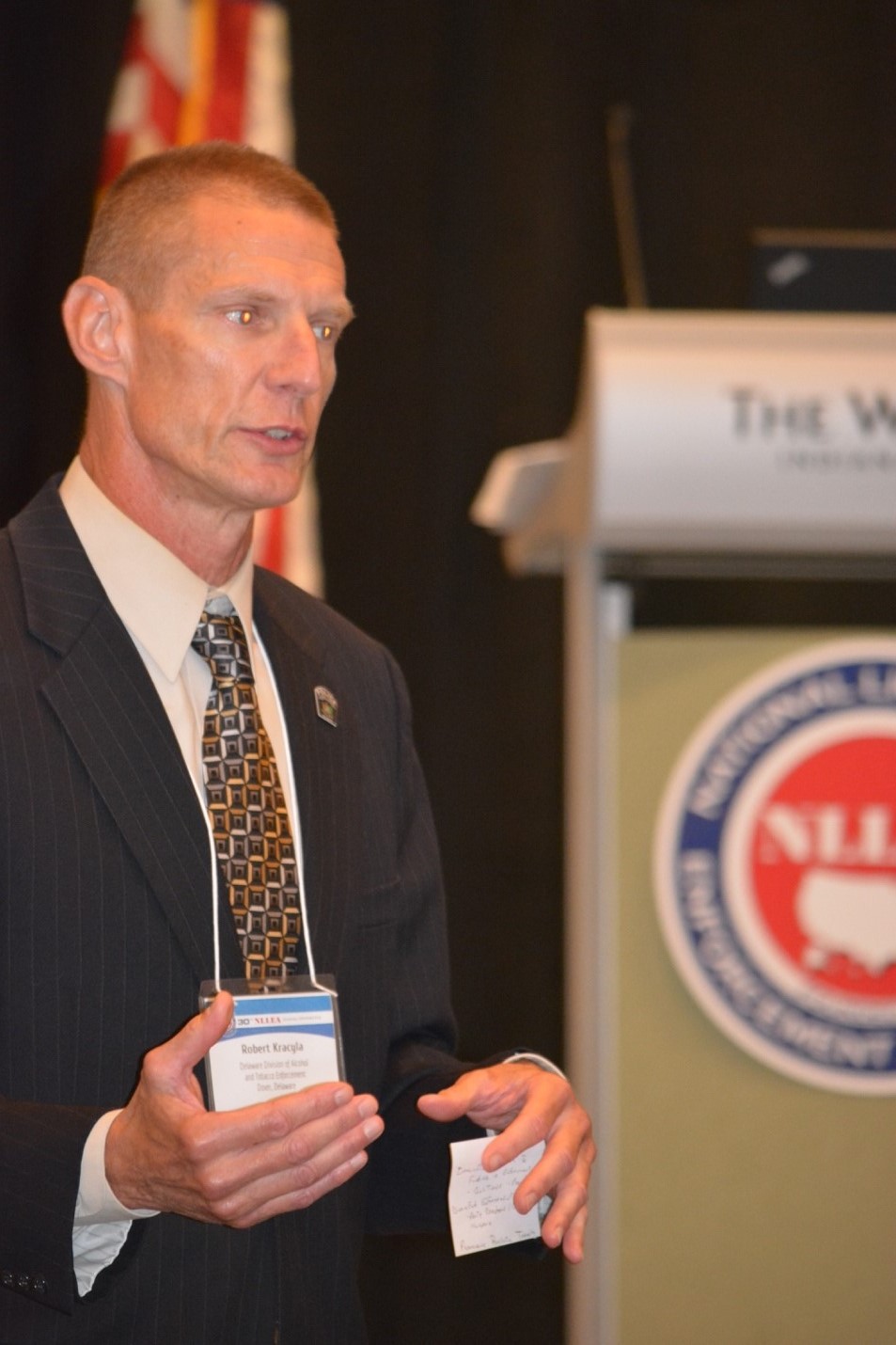 Deputy Director Robert Kracyla of the Delaware Division of Alcohol and Tobacco Enforcement is voted Secretary/Treasurer of the 2016-17 NLLEA board during the annual members meeting. 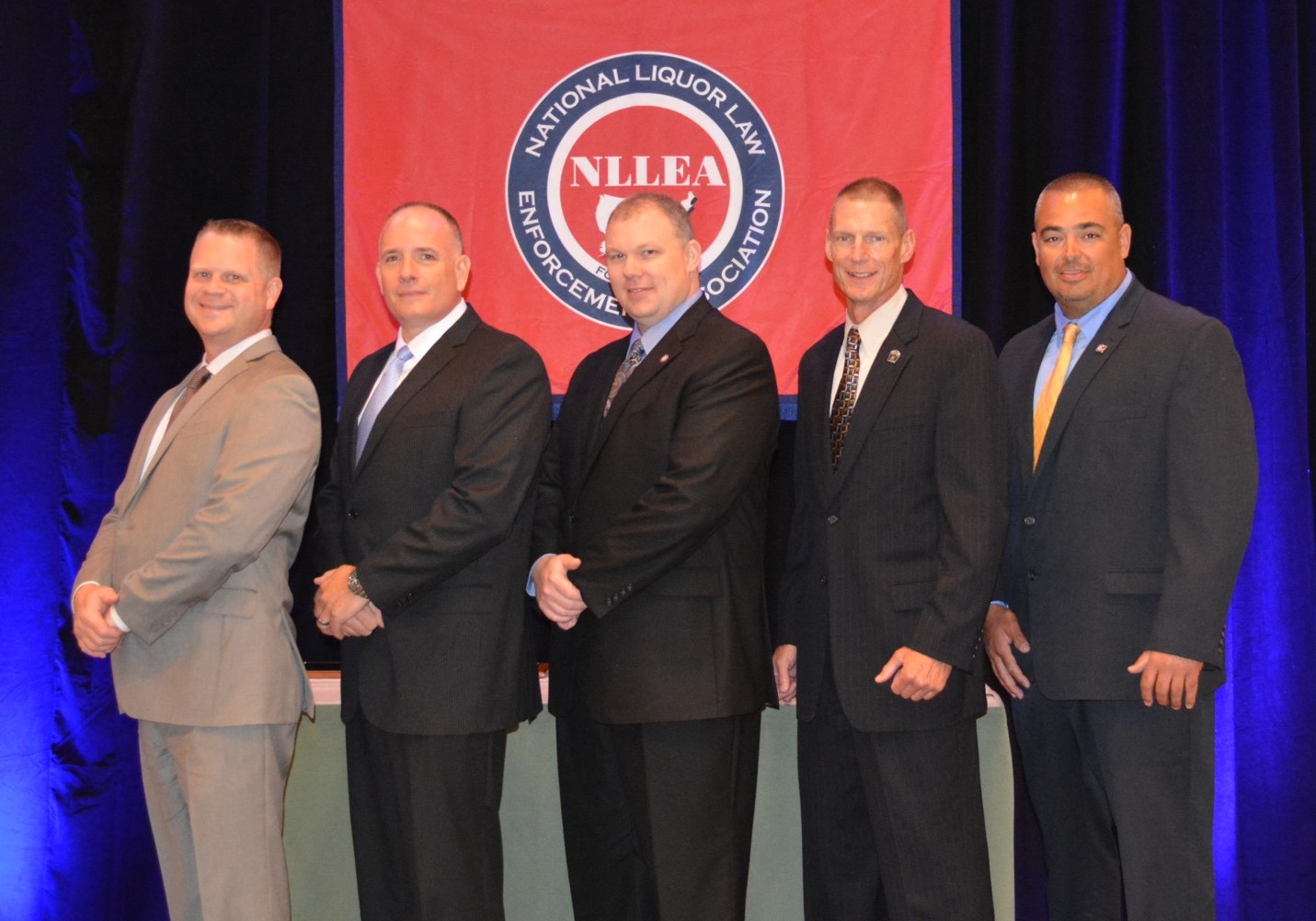